Singers at Trinity have had an exciting start to the new academic year recording the music for three forthcoming blockbusters in the space of three weeks.

At the Air Studios, a Victorian church famously purchased and converted by Beatles producer, George Martin, they recorded the music for the third Hunger Games film due out next month. It stars Jennifer Lawrence with the score written by renowned American composer James Newton Howard. A couple of days later Andrew Sinclair-Knopp returned to record some solos for Angelina Jolie’s Unbroken, and in fact his voice opens the film to be released in December.

Not to be left out, the Trinity Girls’ Choir – and some of their mums – had great fun recording the soundtrack to the new British drama Suffragette out on 16th January 2015 with a star-studded cast, including Helen Bonham-Carter, Meryl Streep and Carey Mulligan.

The Trinity Boys Choir are very experienced in the recording of film music, having worked on features such as The 101 Dalmatians, The Lord of the Flies and more recently Disney’s Maleficent. It requires great skill as the boys have to learn to listen to both the pre-recorded orchestral part and the ‘click track’ which gives the beat simultaneously (they do this through headphones with “one ear on and one ear off”) whilst watching the conductor.

David Swinson, Director of Music at Trinity, explains: “What is exciting about recording film music is that by then the film has been ‘locked down’ and we come in at the very last stage of the film making process. This means that all the key people like the director, producer and, of course, the composer tend to be in the studio with us, which the pupils love.”

Twelve-year old Andrew Sinclair-Knopp (Year 8 – pictured top right), who sings solo in Unbroken said: “Although it was a bit nerve wracking to start with I loved recording the music for Unbroken. It is very angelic and airy music with no real words. It was really cool wearing headphones in the studio; I felt like a real recording star.”

Find about more about Trinity here. 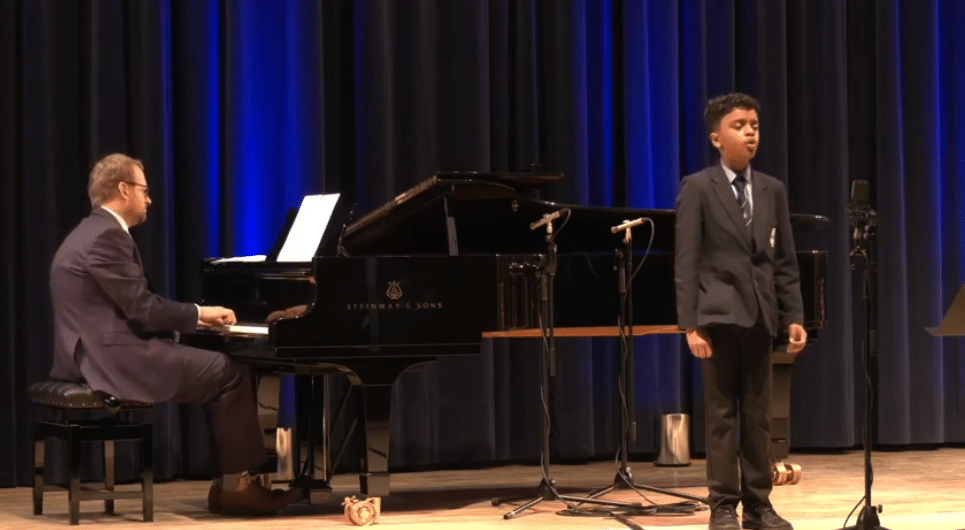